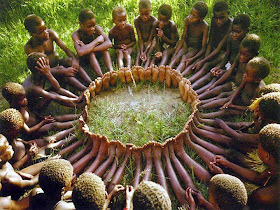 An anthropologist proposed a game to the kids in an African tribe. He put a basket full of fruit near a tree and told the kids that whoever got there first would win the sweet fruits. When he told them to run they all took each other’s hands and ran together, then sat together enjoying their treats. When he asked them why they had run like that as one could have had all the fruits for himself they said: ”UBUNTU, how can one of us be happy if all the other ones are sad?”

‘UBUNTU’ in the Xhosa culture means: “I am because we are”.

"Ubuntu is nothing more or less than compassion brought into colourful practice."

"Ubuntu is a concept that is present here in Africa but I also believe it is present in every human being if it is allowed to thrive and prosper."

Archbishop Desmond Tutu offered this definition: A person with Ubuntu is open and available to others, affirming of others, does not feel threatened that others are able and good, based from a proper self-assurance that comes from knowing that he or she belongs in a greater whole and is diminished when others are humiliated or diminished, when others are tortured or oppressed. Tutu further explained: One of the sayings in our country is Ubuntu the essence of being human. Ubuntu speaks particularly about the fact that you can’t exist as a human being in isolation. It speaks about our interconnectedness. You can’t be human all by yourself, and when you have this quality Ubuntu you are known for your generosity. We think of ourselves far too frequently as just individuals, separated from one another, whereas you are connected and what you do affects the whole World. When you do well, it spreads out; it is for the whole of humanity.

Nelson Mandela explained Ubuntu as follows: A traveler through a country would stop at a village and he didn’t have to ask for food or for water. Once he stops, the people give him food, entertain him. That is one aspect of Ubuntu, but it will have various aspects. Ubuntu does not mean that people should not enrich themselves. The question therefore is: Are you going to do so in order to enable the community around you to be able to improve?

Botswana
In the Tswana language the same concept exists. It is called botho, and the phrase that a person is a person through other people translates to motho ke motho ka batho. Botho is one of Botswana’s five national principles (the others being Democracy, Development, Self Reliance and Unity) Botswana’s Vision states: Botho defines a process for earning respect by first giving it, and to gain empowerment by empowering others. It encourages people to applaud rather than resent those who succeed. It disapproves of anti-social, disgraceful, inhuman and criminal behaviour, and encourages social justice for all.
Malawi
In Malawi, the same philosophy is called “uMunthu”. Malawian philosophers have been writing about uMunthu for years. According to the Catholic Diocese of Zomba bishop Rt. Rev. Fr. Thomas Msusa, The African worldview is about living as one family, belonging to God. Msusa noted that in Africa We say I am because we are, or in Chichewa kali kokha nkanyama, tili awiri  ntiwanthu (when you are on your own you are as good as an animal of the wild; when there are two of you, you form a community). The philosophy of uMunthu has been passed on through proverbs such as Mwana wa mnzako ngwako yemwe, ukachenjera manja udya naye (your neighbor’s child is your own, his/her success is your success too).
Rwanda and Burundi
In Kinyarwanda and Kirundi, the national languages respectively for Rwanda and Burundi, ubuntu means, among other things, ‘human generosity’ as well as humanity (as above). In Rwanda and Burundi society it is common for people to exhort or appeal to others to “gira ubuntu” meaning to “have consideration and be humane” towards others; thus it has the extended meanings of ‘generosity’ and ‘free, given at no cost’. It also has the general meaning of “human’s essence”, which also include the other meanings of the word, as it will be said of a person who shows neither mercy nor consideration to others that he is an animal (igikoko, inyamaswa)
Uganda
In Kitara, obuntu refers to the human characteristics of generosity, consideration and humaneness towards others in the community. In Ganda, the language of central Uganda, obuntu bulamu means being humane, showing kindness and refers to the same characteristics. In Lugwere, a language spoken in eastern Uganda, Kobuntu means the behaviour generally accepted by humans and its natural characteristics.
Kenya and Tanzania
In Kiswahili, a language spoken throughout the coast of East Africa and some of Kenya, the word may refer to “utu”, which means humanness. It is a concept that condemns acts and deeds that seem unfair even in the slightest. The Bantu speakers of East Africa are believed to have originated from the Congo basin and in precolonial times “utu” was the main philosophy governing them. It meant that everything that was done was for the benefit of the whole community. In Luhya (umundu), Kikuyu (undu), Kamba, Meru (untu) and Kisii languages, spoken mainly in the Western, Central, Eastern and Nyanza provinces of Kenya, the “umundu” stands for humanness or the act of being humane to other human beings and to nature in general.